For true pro wrestling fans, CyberFights 95 BAD BLOOD  is a treat  featuring some of your favorite wrestlers from the CyberFight stables in command performance rematches, and new match-ups.  MATCH 1:  FADE VS ALEX PINCHEK  At 5'9" and weighing in at 185, Alex Pinchek gives up almost 40 pounds to six foot 220 pound Fade.  With his shaved head and geared in a very flashy international orange tank suit, Fade can't help but impress.   But Pinchek isn't impressed.  The duo try to out show each other demonstrating their best moves.  But in the end, size matters and Fade takes the match with a sky high face-down body slam.  Splat!  MATCH 2: A tag team match.  DAVEY RICHARDS & BRETT BARNES VS ZERO X & RYAN ASH  Built like a fire hydrant, Texan Brett Barnes and Davey Richards seem like the likey team to win this match up with Zero X and six foot 190 pound Ryan Ash.  Davey and Brett double team the smaller Zero X.  Then Davey gets more than he bargined for from Zero X and Ryan when he and his partner lose.  Brett gets a stiff kick in the face from outside the ropes.  He's down.  He's out.  The underdogs win.  MATCH 3:  A tag team match.  DAVEY RICHARDS & ARDEN CRAIG VS ROBERT ANTHONY & MATT STRYKER  Davey's partner  Arden Craig is a big boy at 6 feet and 225 pounds.  Anthony and Stryker are both over 200 pounds, so there's a lot of poundage at work here.  Davey really takes a beating from Anthony and Stryker.  And double teaming Davey, the two of them work together for a match ending back body drop that Davey doesn't get up from.  MATCH 4:  MIKE POSEY VS ZERO X  Both wrestlers are 5'8", and both wrestlers weigh 160.  A very fair match up.  An Alabama boy and proud of it, Posey wearing black rubber shorts has a lot to say.  Zero X says little and spends his efforts punishing both of Posey's knees.  It looks like a Zero X win until hurtin' Posey pulls off a surprise win with an old fashioned cradle lock pin.  MATCH 5:  BRETT BARNES VS FADE  Fade enters the ring with a bandaged left knee, a red flag advantage Brett does not ignor.  Brett punishes Fade's knee mercilessly.  An almost crippled Fade loses as Brett takes the match using a rope assisted back body drop.  MATCH 6:  A three man match.  SCOTTY MAC VS FAST EDDIE VS SETH DELAY  Scotty wins the fashion award wearing his signature pink and black body suit, and puts on a muscle posing show "for his fans at home."  Georgia boy Seth Delay's wrestling talents are quite a surprise as he makes Scotty and Eddie look like Dumb and Dumber.  Humiliated, they team up to teach Seth a lesson.   Seth does indeed learn a hard lesson from no longer Dumb and Dumber finally losing to a bone crunching back breaker over Fast Eddie's knee.  MATCH 7:  A two on one match.  BRETT BARNES VS SETH DELAY & ZERO X  Brett holds his own admirably making it look like he can not only handle Seth and Zero, but possibly win the two on one match.  But the duo team finally wear the beefy Texan down.  When Brett is flat on his back from an off-the-ropes body drop, both Seth and Zero pile on top of him for the win. 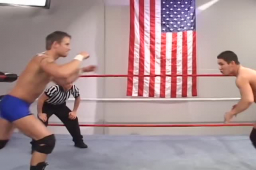